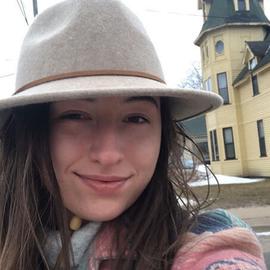 Rhayna Lillie – Marquette, Michigan Rhayna is a senior at Northern Michigan University majoring in environmental science and working towards a certificate in GIS, a certification which necessitates 30 credit hours of mapping, spatial analysis, and programming courses. She is a member of Gamma Theta Upsilon—an international honor society in geography—as well as a reoccurring name on the university’s Dean’s list. She has been expanding on her GIS work in the field, where with a drone (the DJI Matrice 300 RTK) she collects LiDAR (Light Detection and Ranging) and NIR (near- infrared) data which can later be translated to maps. Between the years of 2017 and 2020, Rhayna volunteered at six different farms, where at each she served as a farm hand, sometimes laboring outdoors 40 hours a week. In one such instance, she was picking dill between head high plants full of bees, when a flock of birds blacked out the sky above her—a mesmerizing moment which confirmed her desire to work with nature first-hand. With the CDL, Rhayna is working on generating maps and charts for the Bureau of Land Management using LANDFIRE data regarding both the current and historical fire regimes and ecosystems of the Uncompahgre region of Colorado.

Of the CDL she has to say, “It presents you with challenges and opportunities to grow and learn. And, even though we just meet on zoom weekly, I have started making friends and often meet up with the local people.