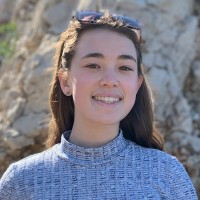 No less talented singer than excellent environmentalist, Maddie Tango joint majored in environmental studies and biology at Middlebury College in Vermont which culminated in a degree in conservation biology alongside a minor in geography. That is to say, she is a really good singer. Maddie spent time living in Barcelona, where she joined a research group in utilizing a drone and its attached camera to supplement satellite data in recording land cover change. She contributed by using the programming language R to automate their data processing to more seamlessly combine the drone’s locational data with the camera’s topography data. Alongside the CDL’s Cheerleader-in-Chief, she looked into carbon programs which encourage people to keep carbon on the ground. They wanted to see a map which showed carbon stacks in non-white communities, so they created a project which combined R, Arc GIS, census demographic data, and LANDFIRE data related to forest types and carbon stacks to create maps for North Carolina, South Carolina, and Georgia. She also underwent an 11-week remote internship working with the Fish and Wildlife Service’s Portland regional office, where she generated a geo-database centered on pollinator habitat restoration efforts and related demographic data in the western U.S., communicating with partner organizations and state agencies to create a dashboard map. During the pandemic, she independently tracked rivers and streams throughout Massachusetts using a survey app, recording signs of degradation and human impact. She also spent time as an usher/house manager at the college’s art center where she garnered experience in training people and communication. Currently, Maddie serves as a team-lead in one of NASA’s DEVELOP internships centered on environmental justice, where her and an entirely remote team proficient in everything from architecture to history and geography look at flood risk in Milwaukee using soil characteristic and land cover data. Of the CDL she has to say, “They’re master networkers; I still get emails from Randy finding people I should chat with. They’re a lab, but more of a community learning from each other.”

Check the dashboard out