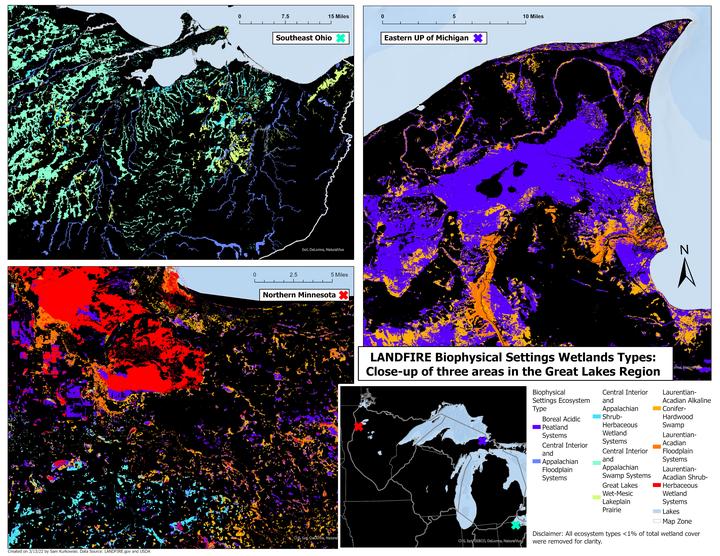 Sam, a graduate student and teaching assistant in a wetlands course at Michigan Tech, has undertaken the project of providing detailed wetland maps for Minnesota, Wisconsin, and Michigan. Wetlands—lands transitional between terrestrial and aquatic systems (that is to say, wet-lands)—comprise around 40% of the Upper Peninsula (U.P.). They typically have a high water table, with water present on the surface or saturating the soil. The amount of water present, soil chemistry, and water flow play the most significant roles in a wetland’s classification—of which there are many, each with their own ecosystems and vegetation. Some have peat bogs and floating mats, while others are dominated by black ash and cedar trees—some are open plains, and some dense forests.

Wetlands’ role in the ecosystems can’t be overstated—they’re irreplaceable. They improve water quality, serve as protection against flooding, assist in erosion control, and provide housing for thousands of animal and plant species. They are vital for biodiversity, and are an important subject for fire managers, conservationists, and hydrologists—to name a few. For this reason, the accurate mapping of wetland locations and types is high-priority, and necessary in monitoring their changes over time. However, mapping wetlands is no easy task.

Before getting into the process of mapping, one has to be familiar with LANDFIRE data. LANDFIRE is a federal program that maps vegetation and fire/fuels for all lands in the U.S. It serves as a unified effort between the United States Department of Interior, the USDA Forest Service, and the Nature Conservancy to create consistent and comprehensive datasets that aid in strategic fire and resource management planning and analysis. Sam’s first step in mapping wetlands was to use LANDFIRE wetland data and translate it into charts to aid in review. She then transferred the LANDFIRE data into ArcGIS Pro (a geographical information mapping tool) and designated the attributes specific to wetlands. Next she took the nationwide sets and narrowed them down to the three states—identifying sample wetland areas within them that would best serve as finely-detailed maps and demonstrate the wetlands’ current and historical Biophysical Settings. However, often times there are still difficulties in distinguishing things on a map, such as wetland types, due to insufficient data or too many depicted variables.

There are over 33 types of wetlands in the Upper Peninsula alone, which proves a challenging aspect when creating a comprehensive map of three states. Aside from having to designate colors to represent each individual type in a distinguishable manner, placing distinct borders between areas that interconnect proves difficult—especially considering how the land historically changes due to altered hydrology, and is constantly being reclassified as a result. To combat this, Sam made design decisions that would best emphasize each individual wetland type—a dark background, bright state borders, and stripped everything but the essentials, focusing on historical and current locations without mapping their changes. The result is a broad, digestible map which is complimented and emphasized by smaller, detailed sample area maps.